For a kid who grew up in the country, surrounded by fields, trees, wind and chickens, it’s odd how much I love intense urban scenes. The highways, the bridges and tunnels, the buildings climbing up through the clouds, lines of warehouses, built by unending lines of dreamers–all pull on my imagination as much as any view of the natural world. In this, my preference has always been the zones created somewhere between the turn of the century up through the 1950s, when America was still in its “as a matter of fact we are going to build that” phase. It was an era of big shoulders, big hands, big concrete and lots of steel. We took the people who couldn’t bear to be in Europe anymore, stirred them in with the ones already here by choice or force, and came up with a construction cocktail that flat-out got things done. The east coast and upper Midwest in particular have the look — New York, Boston, Chicago, Cleveland, and all the others. There’s something about the reflected strength, the sheer massiveness of scale and purpose that gives voice to the rise and decay of the American myth. It’s the rusting over of one collective muscle.

On the 1-9, just west of Hoboken if you’re headed to the New Jersey Turnpike, there’s a mile or so of highway, sunken with another road above it. It’s all asphalt and massive steel girders, a road built for commuters, and trucks hauling granite, for the stream of building and tearing down that is the lifeblood of change. Graffiti covers any flat surface. Sunlight and shadow use the exhaust to make a knife edged angle from the sky to the pavement. If there was ever a wreck here you would be trapped, and it wouldn’t be pretty. Everyone drives fast, both the radio and their guard up loud. You can feel the pulse of the city.

If you asked me for a list of 10 places that reflect America, I’d put this near the top.

Drive it, fast, and turn up the radio. 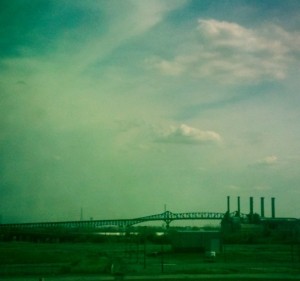