When I was in my early 20’s I became fascinated with these big cut-out Marlboro billboards of a guy riding a horse. They were simple, and very surreal. It was just a guy on a horse, holding a rope, in full gallop. But they were 70 feet tall and always placed so that he appeared to be riding up over some never ending horizon. And being a kid from Texas, there was always a part of the Western myth so embedded in me that I couldn’t escape it even if I had wanted. And to me, this billboard was like a hyper-color manifestation of all those cowboy stories, the western myth, and that peculiarly toxic James-Dean-lone-horseman bullshit all rolled up into one, plastered across the sky under the guise of selling cigarettes.

There was one on Sunset Boulevard, in Hollywood, placed near this curve in the road so it looked like he was riding over the plateau of strip joints and bad tattoo parlors, off to some movie shoot beyond the hills.

But my favorite one was just west of Houston, where FM 1960 connected with Hwy 290. I remember driving back to Austin after one of my trips to play a show at Corky’s in the Heights, seeing this thing up there, lit up and bigger than life itself, and thinking it was about the coolest thing ever. It spoke to so much of what it is that makes Texas both alluring, and at the same time so damn weird and inward. I loved it, and more than that, I believed in it.

That next week I had to write a paper for a class on Western Art and Imagery (yes, I did go to college). I decided to write about this billboard. But in an effort to one-up my other classmates I turned in a song to go with the essay (it goes without saying that I did get an ‘A.’ Occasionally songs actually do pay off). I don’t remember the paper, but the song, ‘Wild West Show,’ ended up on Native Soil, my first disc.

Then a couple of months later Hurricane Alicia tore through Houston. I had to go home and help my dad clear out all the trees that fell in the yard. On the way back to Austin, at the intersection of 1960 and 290, I looked up and the billboard was missing the cowboy’s head and the horse head. I sat at the light thinking about all the meanings behind that image, and as I drove past the sign I saw the two pieces laying in the grass and weeds beside the highway. I did a U-turn, pulled over and threw them in back of my truck.

Through nine moves, two marriages, and 25 years of collecting and getting rid of stuff, these billboard parts have stayed with me. They’re so beautiful and strange, and I think I keep them as a way of reminding myself of where I come from. Over the years I’ve foolishly ditched a beautiful ’72 Fender Precision bass, a Les Paul Custom, a Nudie suit that belonged to Carl Smith and countless other pieces of art and clothing, but not the Marlboro Man. 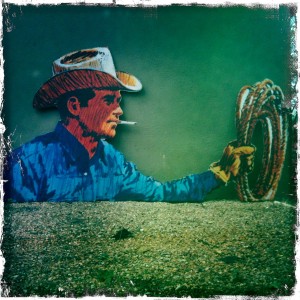